A film by Tilo Krause and Isabel Hahn, ZDF/arte, 43 min.

We join soprano Aida Garifullina during a milestone in her career, on the stage of one of the world’s most beautiful opera houses: the Teatro Colón in Buenos Aires. Accompanied by the musicians of the Orquesta Filarmónica de Buenos Aires under the direction of Argentinian conductor Carlos Vieu, she slips into the roles of Norma, Juliette, Rusalka, the Snow Maiden – and into tailor-made haute couture robes to match. In Buenos Aires, Aida Garifullina plunges into a completely new world, and for the first time in her life she sings and dances the tango.

In Argentina, Aida Garifullina will be coming up against a critical audience that she must first win over. Alongside well-known arias such as “Je veux vivre” from Romeo and Juliet by Charles Gounod and “O mio babbino caro” by Giacomo Puccini, Aida has many surprises in store for the audience, including the aria “Procession of Tsar Berendey” from Nikolai Rimski-Korsakov’s opera The Snow Maiden, which is largely unknown in Argentina. Aida is committed to introducing this aria from the Russian composer to her new audience, whom she hopes to infuse with her own enthusiasm. And she succeeds.

The second surprise is in fact a premiere: Aida has never before sung the role of Mimì from “La Bohème” by Giacomo Puccini on a large stage and accompanied by an orchestra. In the Teatro Colón, Aida rehearses the great aria “Si, mi chiamano Mimì” for the first time. In the end, the soprano puts all her heart and soul into the performance. As an encore, she sings the popular “Por una cabeza” by the tango composer Carlos Gardel and lyricist Alfredo Le Pera. Everyone in Buenos Aires knows the melody and the lyrics to this song, and the singer soon has the audience singing along.

Aida Garifullina is in Argentina for the first time and is keen to get a taste of the tango scene. She visits a milonga and is shown some steps by a professional dancer. “I immediately had a hundred questions for him. OK, which steps? What do I need to do here? And should I look at you here? – Please Aida, just relax and breathe. And trust me. I said: OK, I trust you.”

A few hours later, Aida swaps her high heels for brand new tango shoes, which she is wearing when she steps onto the stage. They are a perfect match for the sublime dresses from the Russian Humariff collection, which were designed exclusively for the singer. On the occasion of her performance at the Teatro Colón, Aida combines these dresses with jewellery from the Santino jewellers in Buenos Aires – fireworks for the eyes and ears. 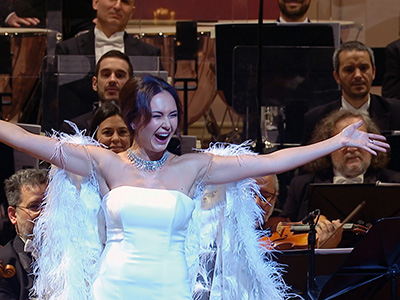 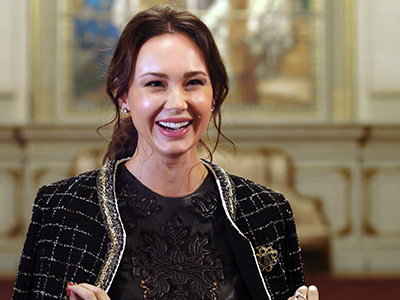 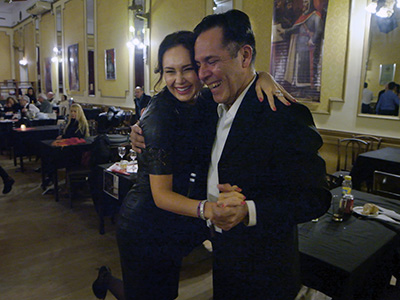