In 1989, Nigel Kennedy’s recording of Vivaldi’s The Four Seasons causes a turmoil in the world of classical music. The press call the musician the “punk violinist” while others treat him with scorn. However, the record goes on to sell more copies than any other classical album before or since. Kennedy succeeds in transcending the reservations of an audience that considers classical music too elitist or aloof. The film tells of the incredible rise of an outsider into superstar and of a Vivaldi interpretation that has achieved cult status.

When Nigel Kennedy presents his vision of a new classical album to the record company EMI, he is met with broad scepticism. Certainly, with his wild hair and an outfit that mixes punk, gothic and new wave, he’s far from the typical classical musician. But manager John Stanley senses an opportunity: “If Kennedy is permitted to be who he is, you could sell millions of records.” And he’s proven right.

The film takes viewers back to 1989 when Kennedy and the English Chamber Orchestra shook up the music scene with their recording of Vivaldi’s The Four Seasons. With daring and verve, Kennedy appeals to an audience that was otherwise averse to classical music, resulting in album sales of over three million and an entry in the Guinness Book of Records.

Early on, the protege of Yehudi Menuhin stands out as a rebel: in the day he studies at the renowned Juilliard School and at night he plays in the New York jazz clubs and learns the art of improvisation, among others from Stéphane Grappelli. 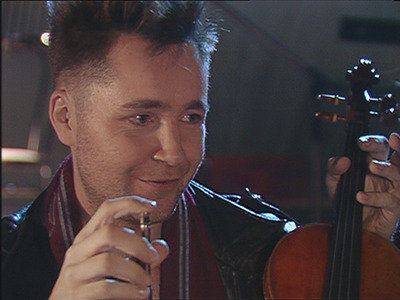 Kennedy recalls: “The classical world felt like a straitjacket. I had to change something or else I had to get out. There was nothing to lose.” During the recording of The Four Seasons, he strives to free himself both from historically informed performance and the Russian School of playing. He seeks out and finds an interpretation that is inarr keeping with the times. With his playing style and arresting appearance, he breaks with the conventions of the classical concert business. The controversy is even discussed in the UK Parliament.

In the concert recording – filmed in the manner of a pop concert – the London audience sits at the edge of the stage in jeans and jumpers. The outfits of the orchestra musicians and the stage lighting change depending on the season. Star violinist Maxim Vengerov tells us what is revolutionary about Kennedy’s playing, and fashion designer Esther Perbandt gives her own view: “He’s an individualist. He doesn’t dress like this to market himself.” Nigel Kennedy says of himself: “I can only be who I am. And that’s how I am.”

With his groundbreaking recording, Kennedy helps young musicians to question the limitations and precedents of the classical music world and he pushes the door wide open for an audience to discover Vivaldi’s famous music.