Ludwig von Reuter is at the center of events. In November 1918, in the midst of the political confusion of the end of the war, the rear admiral loyal to the Kaiser becomes a decisive protagonist in a complex political constellation. He is appointed to decommission the German High Seas Fleet in a British port. The task is a balancing act: while his own crews revolt, the British guards are just lurking to take over the ships in a hostile manner. For seven months, von Reuter lives on the gradually rusting steel hulks, waiting for the outcome of the peace negotiations in Versailles.

There, the German ships become the bone of contention between the Allies. Who should get these heavily armored battleships is unclear. Distributing them would have implications for the already complicated balance of power on the world’s oceans. When the draft Treaty of Versailles is published, the decision has been postponed once again. The only thing that is certain is that they will never return to Germany.

When Ludwig von Reuter learns of this, he secretly orders them to sink themselves in front of the British guards. The consequences for the Versailles Treaty are grave.

The sinking represents the proverbial downfall of the Kaiserreich. It reveals the thought patterns of naval officers loyal to the Kaiser: Their outdated notions of honor seem like echoes of an era that has done away with itself. A similar pattern is to repeat itself years later, when the Nazi regime attempts to manage its own demise under the motto “die and become.” 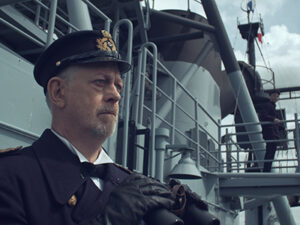 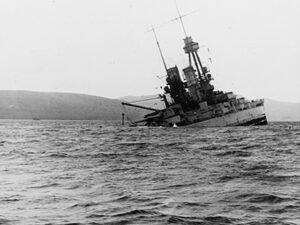 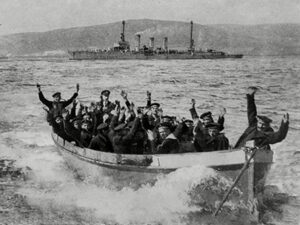