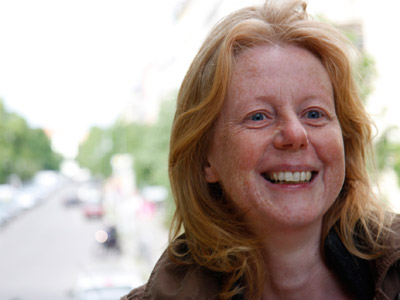 Elke’s films centre on people from all walks of life: She documented the daily life of garlic farmers in China or dancehall pensioners in Berlin. She accompanied homeless people on their way through Germany, former slave workers from Eastern Europe waiting for justice and searched all over the world for remnants of the Berlin Wall.

She often finds the “big” in the “small”: Her documentary “Babske Radio” is set on a bench in a Ukrainian village where women discuss their lives – and big politics. “Worldwide Berlin” documents a day in Berlin – in seven different places with that name around the world.

She shows global connections in “Oil Promises”, a long-term documentary about the effects of oil discoveries in small villages along the Ghanaian coast, or in “Tomatoes and greed”, about the connections between trade policy and migration.

For “#MyEscape”, she worked for the first time with non-professional video material: using mobile phone videos of refugees, the film documents escape routes from Syria, Afghanistan, and Eritrea, creating a uniquely authentic portrait of people on the run. The film won numerous prizes, including the Prix Europa 2016.

“The War on my Phone” portrays people who have found refuge in Europe, torn between everyday life in safety and the news and videos from home. In “Corona Diaries”, people in 10 different countries document their everyday life under the pandemic with their mobile phones.